In 1977 I graduated with a pharmacy degree from medical university in Lviv, Ukraine [link]. A year later, my family emigrated to the United States because, among other things, of my staunch anti-Soviet views (back then, Ukraine was a part of the USSR).

The pharmacy wasn’t exactly my cup of tea, so I taught myself advanced computer programming, and starting in 1982, enjoyed an unusually successful career in this field.

In 1996, I began suffering from late-stage type 2 diabetes and carpal tunnel syndrome. Unable to use the keyboard, I switched focus to studying medicine again with the hope of reversing my precipitous decline.

As improbable as it sounds, by the end of 1998, I fully recovered from both conditions and decided to pursue medical writing and health advocacy.

In the process, I’ve developed considerable expertise in forensic nutrition [link], an area of life-sciences that investigates the connections between supposedly healthy foods and nutrition-related disorders, such as diabetes, obesity, irritable bowel syndrome, chronic constipation, and colon cancer.

This site and the preceding three books are outcomes of that 20-plus years journey toward lasting health, enduring happiness, and ageless longevity.

My photograph above is from November 29, 2016, one month and four days after my 62nd birthday. I am healthier, happier, and more productive in my sixties than I was in my forties, and thrilled to share with you all of my discoveries!

The Story Behind This Site: I Lived to Tell the Story I'd Rather Hadn't Learned!

For reasons I didn't understand at the time, I first experienced the symptoms of irritable bowel syndrome (IBS) in 1984, shortly after quitting smoking. Constipation was the most troubling aspect of it. It was all the more troubling because, during those years, I was quite fit. Each day, I briskly walked or ran with my dog for an hour or two—a graceful Russian wolfhound who needed vigorous workouts to keep him healthy and happy.

So I went to see a highly regarded GI physician in Manhattan, and he told me to eat more fiber, drink more water, and exercise more. I did all that, and, thank God, constipation vanished.

Two years later, I developed excruciatingly painful hemorrhoids. In 1986, I went to another doctor who told me—you guessed it—to eat more fiber, drink more water, and exercise more. I did all that, but the hemorrhoids got worse, and I started experiencing constant pain and discomfort in my abdomen.

In 1988 I went to another doctor who finally told me that I might have irritable bowel syndrome—and he instructed me to eat even more fiber, drink even more water, and exercise even more. In retrospect, it's hard to blame him for sticking to this absurd “gold-standard protocol:”

What I need to know about Irritable Bowel Syndrome

Besides telling you to eat more foods with fiber, the doctor might also tell you to get more fiber by taking a fiber pill or drinking water mixed with a special high-fiber powder.

National Institutes of Health;
Publication No. 03–4686

Of course, I did all that, and the pain, discomfort, and flare-ups from hemorrhoids grew much worse, so in 1990, depressed and miserable, I gave up on doctors and went to Barnes & Noble—a favorite “research” venue for take-charge individuals before the advent of the Internet. One book in particular — Fit For Life — described a situation very much like mine. At that time, it offered what seemed like a logical solution: a vegetarian lifestyle with even more fiber and water.

I willingly embraced this “promising” approach, and by 1994 I was twenty-four pounds overweight, clinically depressed, and suffering from a whole range of degenerative conditions specific to type 2 diabetes. The situation with IBS, constipation, and hemorrhoids degenerated, too.

All along, I kept loading up on carb-heavy juices, fruits, vegetables, bread, rice, and pasta. Various doctors administered blood tests, but, as often happens in younger patients, my “fasting plasma glucose” wasn‘t yet high enough to diagnose me as a diabetic despite all the apparent signs. They included substantial weight gain, polyuria (frequent urination), dry mouth, constant tingling in the extremities, and a host of other less obvious symptoms of late-stage type 2 diabetes.

— How could they have missed it? — Well, for several reasons, all of them pretty darn stupid:

Undiagnosed diabetes isn't as uncommon as you may think:

Diabetes is frequently not diagnosed until complications appear, and approximately one-third of all people with diabetes may be undiagnosed.

Eventually, it all adds up to no good: by the time most patients are finally diagnosed, the damage from diabetes (most of it irreversible) has already occurred. In my case, undiagnosed diabetes worsened my irritable bowel syndrome because anorectal neuropathy (nerve damage) made me even more dependent on fiber.

What happened next was as liberating as it appears improbable. In 1996, after passing out from low blood sugar (the opposite side of the coin for type 2 diabetics) while waiting for a green light, I started researching my problems in earnest. Shortly after that, encouraged by my findings, I abandoned a vegetarian diet and went on a gluten-free, fiber-free, and low-carb diet. Almost immediately, IBS symptoms—abdominal bloating, flatulence, and pain—cleared up, but not constipation or hemorrhoids. They got worse.

By the year 1998, I was diabetes-free. Not only that, but most of the diabetes-related complications were gone, too: sky-high triglycerides, erratic blood pressure, chronic colds and infections, painful gout and arthritis, debilitating carpal tunnel syndrome, chronic fatigue, migraines, insomnia, irritability, and depression.

I couldn‘t, though, undo the damage this insidious disease had caused to my career, bank account, and relationships. Nonetheless, business failure and bad memories were a small price to pay for this kind of startling recovery.

By 2002, I‘d lost 24 lbs (11 kg), and scaled-down from a size 40 back to 32, the same size I wore in my early twenties. Throughout the process, I remained vigorous, productive, healthy, and free of IBS. I also published my second book: Reversing Metabolic Syndrome: How Carbohydrates Ruin Your Health and Wealth, and What You Can Do To Reverse the Onslaught of Metabolic Syndrome. It became the second highest-selling Russian-language title in the United States.

By 2004, while researching my first English-language book, entitled Fixing Up The Atkins Diet: Why Dr. Atkins is Dead, You're Still Overweight, and The Debate Rages On, I embarked on writing a brief—ten pages, tops—section on constipation because it's by far the most common and troublesome side effect of low-carb/low-fiber diets, including Atkins', South Beach, Protein Power, and others. By the time I finished writing that section, it was almost 300 pages long. By the end of 2005, it evolved into Fiber Menace and, two years later — into this website.

That's me telling Dusik & Nosik, our beloved cats: “Boys, no dry food in our house!"

And that‘s the “happy end” story behind the genesis of Fiber Menace, Gut Sense, and this website. Close to 50 million Americans with IBS [link] and over 105 million [link] affected by pre-diabetes and type 2 diabetes aren't that lucky. Neither are their pets. Not yet, I hope.

As a side note, I'd completed researching Fixing Up Atkins shortly after Dr. Atkins' sudden and mysterious death in the spring of 2003. Dr. Atkins himself passed away while morbidly obese — at 258 lb — and the Medical Examiner's Autopsy Report had also noted that he had a history of heart attacks (myocardial infarction, or MI), congestive heart failure (CHF), and hypertension (HTN) [link]. The ensuing controversy over the actual causes of his death and his weight had killed the chances of this book's successful release.

This Q&A page brings my story up to date. 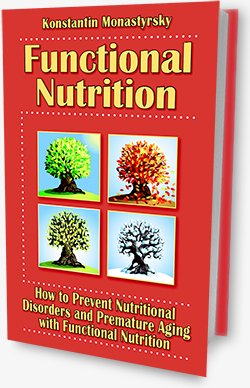 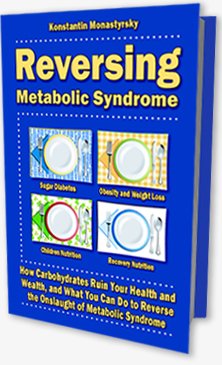 NVP (Nausea and Vomiting during pregnancy