It is an open secret that screening colonoscopies increase mortality.

As far back as in 1996, the Telemark Polyp Study 1 demonstrated that two-and-a-half times as many screened patients had died from all other causes than had been presumably saved from colon cancer by the colonoscopy in the first place.

Author‘s commentary: It‘s worth noting that the Telemark‘s colonoscopies were performed “by the book” at a major metropolitan hospital by experienced GI surgeons, and without any profit considerations or time constraints. Alas, the average endoscopist at a local colonoscopy mill compares to these surgeons just like the presidential physician at the White House compares to a part-time doctor at a neighborhood walk-in clinic, and so do the outcomes.

In no way I wish to disparage the hard work of any doctor at any clinic regardless of its income potential or location. The difference lies in the amount of time and attention allotted to each individual patient, while the President is the one and only patient. This factor alone reduces inadvertent medical errors by a mile.

Just like with any abdominal surgery, there are four primary factors that contribute to colonoscopy-related complications. These are the side effects of colon prep, the aftermath of general anesthesia, endoscopy-related surgical wounds, and medical errors.

Lets review them one-by-one, with emphasis on risk and mortality:

I‘ll start with the side-effects of colon preparation. Normally, the large intestine is filled with fecal matter throughout its entire length. To have an unobstructed view, all feces must be purged clean with a laxative, a procedure known as “colon prep” or “lavage.”  Severe dehydration, kidney damage, and bowel movement disruption are the most common side effects of this step.

With the number of screening colonoscopies growing, the problem became significant enough to get the Federal Drug Administration into the action: 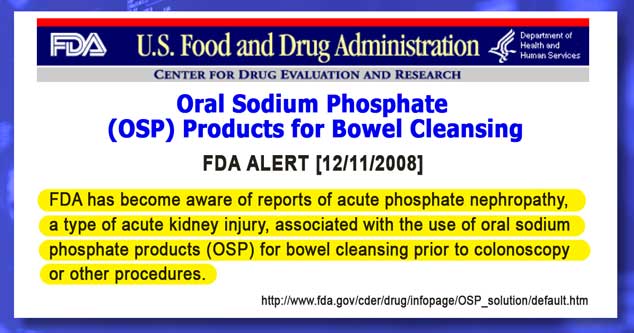 “FDA has become aware of reports of acute phosphate nephropathy, a type of acute kidney injury, associated with the use of oral sodium phosphate products (OSP) for bowel cleansing prior to colonoscopy or other procedures.”

Over 85,000 people die annually from kidney failure [22] — that is almost 50% more than from colorectal cancer. I believe many of these deaths have been precipitated by a careless and damaging colon prep.

Author‘s commentary: Kidney damage is an especially high hazard for tens of millions of older Americans with diabetes and prediabetes who may already have weakened kidneys. If you are taking the most common hypertension and heart disease medicines, you too are at increased risk.

This means that the annual rate of kidney damage related to screening colonoscopy is at least 14,000 cases. Because kidney damage is difficult to detect quickly, the actual rate may be higher. I came across more recent articles that indicated the damage rate as high as 1%, or 140,000 cases.

The prep-related dehydration may result in dizziness, syncope, ischemic stroke, blood clotting, sudden cardiac death, a fall or an accident, medication overdose, and other complications. The death rate related to these side effects is not known. 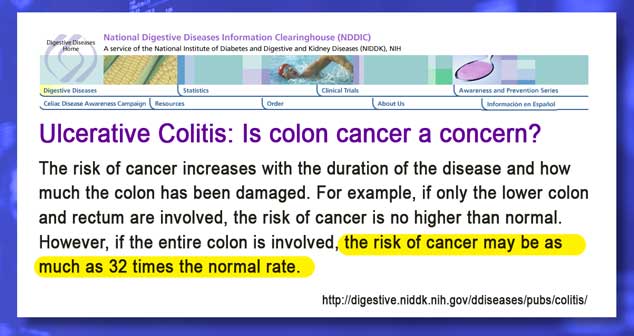 Now, lets review the most common side-effects of general anesthesia.

Author‘s commentary: If you have ever experienced even mild flatulence, you must know what the pain from gas pressure feels like. To keep the colon wide-open, doctors pump compressed air into the colon at several times the pressure of gases. For this and other reasons colonoscopy without anesthesia is an extremely painful procedure.

Unfortunately, all types of general anesthesia are extremely risky because it affects blood circulation, heart and lung function, and turns off immunity. Just the confirmed rate of severe cardiovascular risk from general anesthesia for low-risk surgical procedures, such as colonoscopy, ranges from 0.27% to 1.1% within the first six days after the surgery. 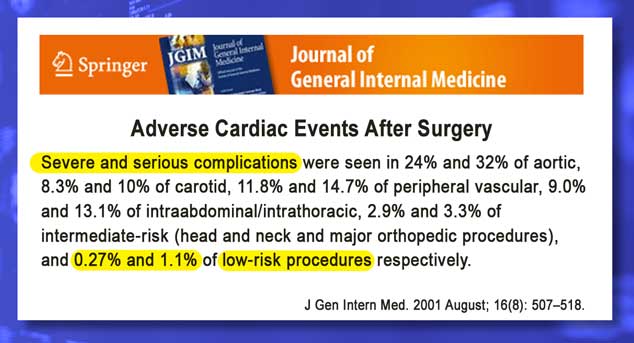 Deep vein thrombosis and pulmonary embolism is another common side effect related to general anesthesia, even a brief one. Pulmonary embolism causes or contributes to up to 200,000 deaths annually in the United States [23].

Author‘s commentary: Deep vein thrombosis (DVT) is, essentially, blood clotting due to immobility and the slowdown of blood circulation, caused by the anesthetic. The risk of clotting increases with the anesthesia‘s duration. That is why a thorough colonoscopy lasting an hour or more is much riskier than the assembly-line hack jobs that usually take under 10 minutes. It may take weeks for a clot to dislodge and travel up to the lungs, so it‘s hard to connect this outcome to the colonoscopy.

An estimated 25% of all people develop chest infections after general anesthesia, and many older people die weeks or months later from acute pneumonia. Mortality rate from pneumonia is 5%, and about 60,000 people die annually — slightly more than from colorectal cancer.

Accidental colon perforation with endoscope, injuries from air insufflation and/or endoscope, and bleeding from polyp removal with a wire loop are the primary immediate complications of the colonoscopy procedure itself.

According to the “Complications of Colonoscopy in an Integrated Health Care Delivery System” report, the rate of complications from conventional diagnostic colonoscopy, such as colon perforation, bleeding, and diverticulitis, reported at 5 in 1,000, or 0.5%. [24] 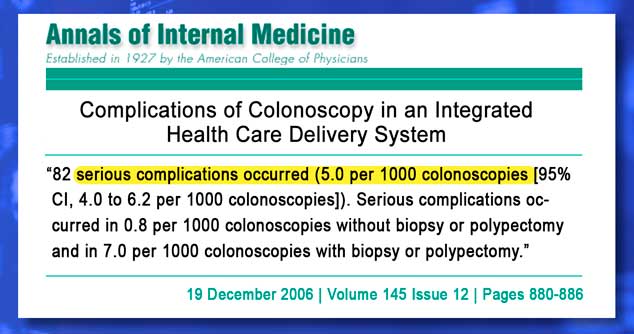 Author‘s commentary: The above study authors indicated that “much of the information on complications has come from studies or referral centers and might not reflect what actually happens in the general community.” This is coded language for “actually, it may be much higher, but we don‘t know just how much higher…”

According to numerous published reports, only [up to — ed.] 20% of all medical errors are ever reported. With this in mind, the actual rate of screening colonoscopy complications may be as high as 20 in 1000, or 2%.

Author‘s commentary: Since the colon‘s environment isn‘t exactly “dry and clean,” an infection often occurs at the polypectomy site and in diverticula, and some of them may require follow-up abdominal surgery to remove the affected portion of the colon.

Finally, don‘t ignore the release of cancer cells into the body caused by polypectomies and biopsies, particularly among younger people. It takes ten years for one polyp in twenty to grow into a cancer tumor. But it takes only a fraction of this time for these cells to turn into all other cancers once they are released into the blood by the very doctor who is trying to protect you from colon cancer.

— Up to 14,000 potential deaths from kidney damage. That‘s a low-ball estimate.

— The number of deaths from pulmonary embolism related to general anesthesia isn‘t known, but it may be considerable. Knee replacement surgery, for example, causes 1 case of pulmonary embolism per 100 surgeries [link]. In the case of colonoscopy, even one case in 500 is enough to kill 7,000 people annually.

— At least 70,000 patients get injured by colonoscopy according to actual reports. The unreported injury rate may be close to 280,000 or 2%. Considering the type of complications — internal bleeding, colon perforation, diverticulitis, and infections — many of these patients end up dead!

— The annual incidence of colorectal cancer in the United States is up by 30,000 more cases since the colonoscopies begun in earnest in the year 2000. Most likely this increase is directly related to colonoscopy‘s complications. At least 10,000 patients will die shortly after the diagnosis.

— The potential long-term death toll from all other cancers caused by polypectomy-related contamination, and radiation exposure from virtual colonoscopies will be in the millions.

— Lives saved by screening colonoscopy? Even according to Katie Couric, who has a penchant for exaggeration, just 2,500 a year… — In this statistical and logistical context, considering a screening colonoscopy for prevention is akin to committing suicide at the age of 50 to prevent dying from colon cancer by the age 72.

Knowing all this information now, would you bet your bet your life, health, and future on a screening colonoscopy instead of elementary prevention? I hope not.

22 Kidney Failure: Choosing a Treatment That's Right for You; National Institute of Diabetes and Digestive and Kidney Diseases [link] 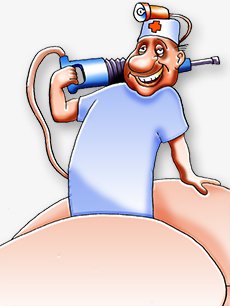 — Sure, it's a dirty job, but what a great living!

Part I. The Anatomy Of A Deadly Deception