The healthy bowel is governed by intestinal bacteria in the same way healthy digestion is governed by digestive enzymes. When the enzymes get damaged or deficient, people suffer from malnutrition. When the intestinal bacteria get damaged or deficient, people suffer from bowel disorders that culminate in colon cancer. This condition is called dysbacteriosis (dysbiosis), and it is most commonly  caused by the indiscriminate use of antibiotics, fiber laxatives, and colonoscopies.

Amazingly, the American medical establishment rejects the existence of dysbacteriosis because acknowledging it will cut into the sales of profitable antibiotic drugs. Not so outside the United States. Here is an excerpt from a classical European textbook for medical doctors: 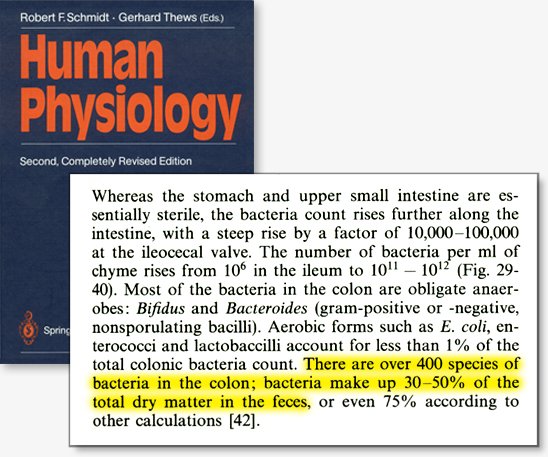 This unusual situation — ignoring outright normal human physiology —  was easy to accomplish because the majority of medical reference and most of the medical textbooks in the United States are produced and published by the pharmaceutical companies, and edited by the medical doctors and scientists who are paid by the same.

Not only do the bacteria make up to 75% of the feces' “dry matter,” it is also responsible for retaining water in feces, and making stools soft and moist. Once the bacteria are gone, the stools become small, dry, and hard as a rock, similar to Type 1 on the BSF stool scale.

When that happens, patients in the United States commonly resort to fiber to replace bacteria in order to relieve painful defecation, irregularity, and/or constipation. The Europeans, on the other hand, or the Americans in-the-know, work hard to restore intestinal flora with probiotic supplements.

Domestic animals and toddlers, who aren't inhibited by any mores, instinctively eat the feces of other animals to attain a similar “therapeutic” effect. I realize it sounds gross, and don't condone eating feces, but am simply getting the message across — if you deny the will of mother nature, it will ultimately always win. In this case it means — when your gut ends up “as clean as a whistle,” you end up “as good as dead.”

In addition to all of the above, healthy intestinal flora is responsible: for protecting the mucosal membrane from invading microbial and viral pathogens; for providing the primary immunity response (phagocytosis); for synthesizing vitamin K that is essential for proper blood coagulation, and biotin — an essential B-vitamin (B7). Biotin deficiency causes hair loss at any age, eczema, seborrheic dermatitis, gray hair, and is connected to type II diabetes.

To restore your colon ecology following the use of antibiotics, related to fiber dependence, or after the colonoscopy, review the Dysbacteriosis (Dysbiosis) page.

Supplemental probiotics and probiotic drinks (such as Activia) generate huge business. Unfortunately, most of these supplements and beverages are not only useless health-wise, but may also become harmful because their regular use may populate (infect) lower regions of the small intestine with excess bacteria.

In turn, this bacterial infection may cause severe bloating, pain, inflammation, and intestinal obstruction that may require intensive antibiotics therapy or surgery.

Unfortunately, when these problems are taking place, most “natural” doctors and nutritionists recommend taking even more probiotics, which inadvertently, causes even more severe inflammation.

Activia and similar dairy beverages are marketed as “kefirs” or “yogurts.”  This deception, actually, has nothing in common with kefir or yogurt in the original sense, and for the following reasons:

— For starters, the original beverages didn't contain live bacteria because they were killed by alcohol, the byproduct of bacterial fermentation of lactose. In fact, these drinks were fermented to alcoholic stage to specifically KILL all bacteria, good and bad.

— The whole premise of “live” bacteria in Activia is based on dubious research paid for by the Activia manufacturer, conducted with non-commercial (specially made) formula, and on just a few young, healthy subjects. In plain language, these claims are a plain vanilla consumer fraud.

— Next, most factory-made probiotic beverages contained unfermented lactose, artificial colorings, carcinogenic and allergenic additives, soluble fiber, and proteins denaturized by heat treatment. In other words, their nutritional value is nil.

— Finally, when their labels say “USDA Organic,” it simply means that the manufacturing process started with organic milk or organic milk powder, but the resulting beverage is just as harmful as non-organic.

To differentiate itself in the competitive marketplace by making inflated claims, some probiotics add supplemental soluble fiber (such as pectin or inulin) to “feed” bacteria, others add bovine colostrum, and so on. All these substances are extremely allergenic, especially while intestinal inflammation is taking place.

The only “saving grace” — most probiotics are recommended to be taken with food. As long as your stomach digestion is normal, and your meals include some protein, hydrochloric acid will kill all of the bacteria in liquid formula and most of the bacteria in non-enteric (formulated to pass the stomach intact) capsules. In other words, taking probiotics with food is no different from taking a sugar pill.

1. During an acute intestinal inflammation stage, probiotics aren't the solution, but the source of the problem.

2. Do not take probiotics or drink probiotic beverages for severe bloating, or during acute diarrhea, and at least one week after (to allow for healing) because diarrhea is commonly accompanied by inflammation in the small and large intestine.

3. Do not take any probiotics that include additives, such as bovine colostrum, psyllium, pectin, inulin, senna, or fiber.

4. Quality probiotics should be taken on an empty stomach, or with non-protein containing meals.

5. Quality probiotics are provided in enteric capsules. This way they can reach their destination still active.

6. Do not use probiotic beverages such as Activia, yogurts, or kefirs, particularly during an acute phase of intestinal disorder.

7. Toddlers are especially vulnerable to probiotics side effects because their gastric acidity is inadequate to sterilize stomach‘s content, and they may quickly develop severe intestinal allergies.

In no way do I wish to imply that all probiotics are bad, harmful, or not needed. I recommend and take them regularly myself. All that I mean is what I have said: probiotics are beneficial only when properly formulated, properly taken, and not abused.

Colonoscopy: Is It Worth The Risk?